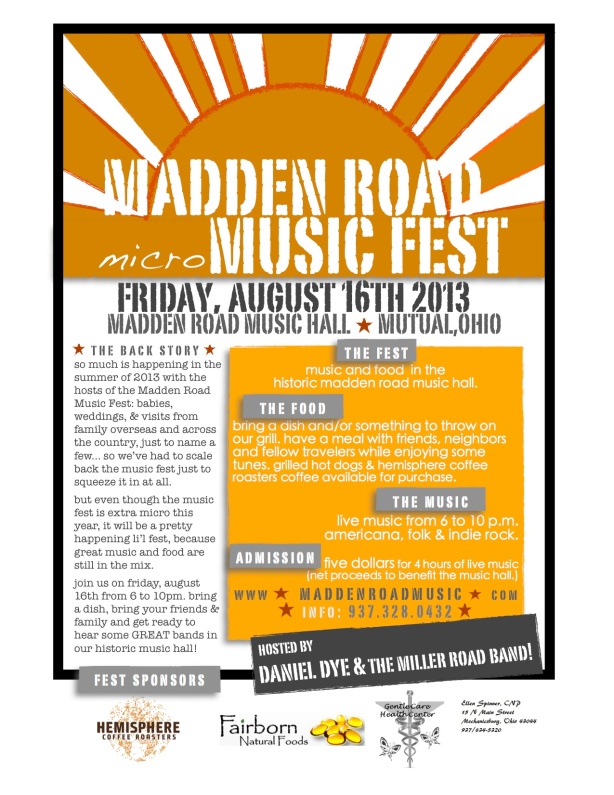 The Madden Road Music Fest is a micro-festival celebrating locally-made music. Designed to bring together locals on the Central Ohio music scene, the festival is hosted by the singer/songwriter and homegrown Ohioan Daniel Dye and the members of his family who come together as The Miller Road Band. With sets featuring everything from Indie Rock to Gospel, the Madden Road Music Fest has a little something for everyone. This year’s festival features a potluck so that friends, neighbors and friends’ neighbors can share a meal while listening to some great music.

Net proceeds from the festival will help fund the restoration of the Madden Road Music Hall in Mutual, Ohio. The music hall is Mutual’s former town hall, a unique early 20th century brick building that was, at one time, the community center of this small crossroads settlement, playing host to town affairs — including the occasional basketball game. Madden Road Music Fest helps sustain the building’s renewed life as a venue for the community to come together again. And there’s no better way to make this happen than to listen to live music together.

The Madden Road Music Fest runs from 5-10 pm on Friday, August 16th, 2013 and is located at the crossroads of S. Mutual Union Road and East State Route 29 in Mutual, Ohio. Tickets can be purchased for the festival here and will be reserved at the door in ticket-holder’s name for pick-up on the day of the festival. Tickets are non-transferable without prior approval

The grounds will be open beginning at 5pm. Grilled hot dogs, coffee & other beverages will be available for purchase, with a percentage of the proceeds going to fund the restoration project.

We would like to thank our Madden Road Music Fest 2013 sponsors!

Todd the Fox and Lisa Bunny